Austerity is violence on the bodies of women

In Rome, activist women responded to the #occupypatriarchy call out initiated by the Occupy Wall Street Movement. The group, composed of students, precarious workers and migrants, marched through the city centre’s high streets on November 25, International Day for the Elimination of Violence Against Women. 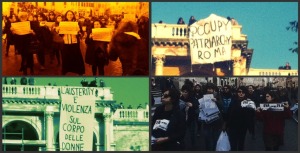 Austerity is violence on the bodies of women

Recent reports and stats show how in Italy the new “welfare system” feeds on unpaid women’s work: the unpaid work of grandmothers looking after their grandchildren because nursery schools cannot be afforded, daughters supporting their elderly parents, mothers supporting their grown up children. With the cuts to social services the responsibility of that work falls on the women.

In these austere times, gender equality has become a “luxury item”. When the government seems to support policies on work/life balance, what they’re de facto supporting is the principle according to which a woman must undertake several jobs at the same time: all precarious, without the guarantees of the “official” job market, without wages and employment rights. This is violence masked up as austerity!

The crisis attacks every possibility of autonomy, self-determination and freedom of choice. This is, for example, the aim of the Tarzia Law, which wants to turn our formerly independent family planning centres into family and baby protection centres in the hands of non-qualified Catholic “advisers”. This goal has already been achieved in the region of Lazio, in what appears to be an experiment undertaken to legitimise the same savagery on a national scale. Independent family planning centres and abortion rights are an area of conflict on which women in Italy must keep fighting, especially with our new government and its Vatican friends.

This entry was posted in Updates On Oppression & Resistance In The Motherland, Womyn & Feminism and tagged feminism, sexism, womyn. Bookmark the permalink.

7 responses to “Austerity is violence on the bodies of women”