Earlier this year, activists in Rome won the right to self-manage a vast lake in an impoverished area of Rome. Read Jamie Mackay’s editorial on openDemocracy:

The demonstrations that took place all over Italy on 14th November as part of a European Day of Action against austerity are already setting the pace of the new management of public order. In Rome in particular it’s been forbidden for months to get anywhere close to the political headquarters during demonstrations, despite the revocation of the decrees introduced last year by the Mayor to turn the whole of the city centre into a red zone.

END_OF_DOCUMENT_TOKEN_TO_BE_REPLACED

Posted in Repression, Prison & Police Brutality, Updates On Oppression & Resistance In The Motherland

On the state of movements: let’s open the debate

Some American and European comrades have asked me, Why didn’t you have an Occupy movement in Italy? Why is the NO TAV movement the only expression of social struggle? The NO TAV, despite their strong success, despite their original expression of post-modernity class war, lack the characteristics of the Occupy movements: an extension of social change, the power to remove old hierarchies, and, above all, a shared and “common” political dynamic open to radical political upheavals.

But here’s another paradox: what sense does this question have now? The Occupy movements seem already dead. The Arab springs have mostly been crashed by military coups and civil wars, or have ended up producing Islamic regimes that seem to forecast the repression of freedoms and political practices only just discovered – the continuation of the status quo under a different name, possibly even worse than the old theological-political dictatorships. In Europe, movements have been suffocated by the unhealthy atmosphere brought over by the economic crisis, while in the States they are just about to be swallowed by the political structures that nowadays dominate the electoral deadlines. END_OF_DOCUMENT_TOKEN_TO_BE_REPLACED

NO TAV against fascism!

Last Friday 9th March, a small number of militants from the neofascist group Forza Nuova (“New Force”) protested outside the offices of the newspaper Il Giornale in Milan. The protest was held in solidarity with the NO TAV movement, and Il Giornale was targeted in particular for its bitter criminalisation of the movement. The protesters distributed leaflets and hung a banner saying “Your progress has killed the sky” (Pretentious, banal and empty: way to go, guys!). According to the group, what’s at stake in the Susa Valley is “an entire social model”: END_OF_DOCUMENT_TOKEN_TO_BE_REPLACED

Posted in Environment & Local Communities, Updates On Oppression & Resistance In The Motherland 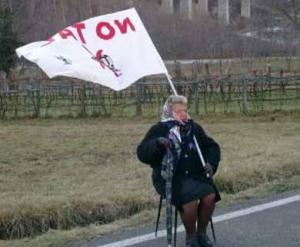 Responding to a call out made by women within the movement a few days ago, today around 100 NO TAV women met up in Susa to “have a chat” with the local Mayor (a woman herself). The protesters bumped into the Mayor just outside the Council House and informed her they would “make a visit” to the meeting that had been planned in the morning. END_OF_DOCUMENT_TOKEN_TO_BE_REPLACED