Italy is a racist country

This was written the day after the racist shootings in Florence, where a right-wing extremist shot dead two Senegalese men, Samb Modou and Diop Mor, and injured another three, Moustapha Dieng, Sougou Mor and Mbenghe Cheike (who are all out of danger now). Despite being focused on Italy and its history, I think it could be applied to any other country and to many other political issues. Real transformation can only come from a radical questioning of ourselves, our prejudices, and our ways of doing things. END_OF_DOCUMENT_TOKEN_TO_BE_REPLACED

Fascists out of our cities! More on Casapound and recent racist murders 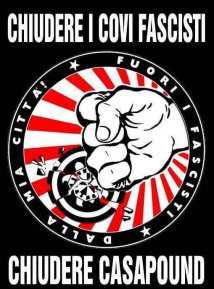 Shut down the fascist dens, shut down Casapound. Fascists out of my city!

After the shootings of 3 days ago in Florence at the hand of a right-wing extremist who killed two Senegalese street vendors and injured another three, Senegalese migrants joined by local residents and antiracist organisations improvised a march through the city centre, ending at the local Court. Interestingly enough, the police, who, after the first murder, should have in theory been trying to catch the murderer, decided instead to focus on and repress heavily the spontaneous demonstration with charges and beatings. END_OF_DOCUMENT_TOKEN_TO_BE_REPLACED

Two days ago in Turin a teenage girl whose parents subjected to regular gynecological tests to check she was still a virgin, claimed she’d been raped by two Roma men from the campsite nearby her home. A few hours later, a protest organised by some locals against the alleged rape degenerated into a proper pogrom, with the Roma campsite set on fire. Nobody was hurt because many of the camp residents managed to run away before the fire, but most of the caravans were burned. Shocked by the events, the girl eventually confessed she’d made up the rape because she was afraid to tell her parents she’d lost her virginity. The newspaper La Stampa, after inciting people to take action against the Roma, published an apology “to ourselves and our readers”, without any mention of the Roma people who’ve lost their homes. END_OF_DOCUMENT_TOKEN_TO_BE_REPLACED