Accusations against housing movements in Rome demolished by Tribunal

In September 2009, hundreds of Carabinieri stormed a school in the Magliana area of Rome and arrested dozens of people who were occupying it. The charges made against them were super harsh: organised crime, extortion, possession of weapons, theft, assaulting police officers, and more. The arrests took place during a relentless propaganda campaign orchestrated against the occupations by the local media. Several politicians, including Rome’s Mayor Alemanno, released statements in solidarity with the police operation, against those “dangerous criminals” that were hiding behind the occupations. A few people spent months in prison, some lost their jobs as a result of it. END_OF_DOCUMENT_TOKEN_TO_BE_REPLACED

Posted in Social Mobilisations & Community Organising, Updates On Oppression & Resistance In The Motherland

Ongoing solidarity with the NO TAV arrestees 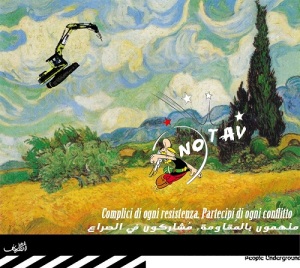 Accomplices of any Resistance. Participants in any Conflict. (Solidarity materials from Tunisia)

Over the last few weeks solidarity actions and initiatives with the NO TAV arrestees have kept multiplying: dozens of pickets and demonstrations in various parts of Italy, messages of support from all over Italy and other countries (such as the Basque Country, where people have been fighting the same battle for years, and Tunisia), fundraising and benefit gigs. A few days after the arrests a big benefit gig was held outside Turin’s main prison where most of the local NO TAV activists were being held. END_OF_DOCUMENT_TOKEN_TO_BE_REPLACED

Wave of arrests among the NO TAV movement

NO TAV: it's impossible to stop us!

With charges such as violence, property damage and injuries to police officers, more than 40 activists of the NO TAV movement have been put under investigation: 25 are under arrest, while the remaining ones are under house arrest and similar banning orders. The operation started at dawn on January 26, saw more than 150 officers involved, and took place all over Italy (and even parts of France, where some local activists were prohibited to travel to Italy). The majority of arrests were made in Turin, but many other towns and cities were also targeted by the raids: Milan, Palermo, Rome, Padua, Genoa, and many more. The operation is specifically linked to the clashes that took place between NO TAV activists and police officers in the two big action days of summer 2011, June 27 and July 3. END_OF_DOCUMENT_TOKEN_TO_BE_REPLACED

NO TAV
The 4 activists arrested on 3 July following the NO TAV protests in Chiomonte were all released a few days ago – the Tribunal decided the preventative arrests were an excessive measure and replaced it with home arrests for Gianluca, Salvatore, Roberto, and Marta. Support for their case doesn’t stop here though – the final goal is to see them completely free of all allegations and restrictions. END_OF_DOCUMENT_TOKEN_TO_BE_REPLACED

More arrests in Florence and Milan

Florence: just about a month after the events of May 4th (5 arrests and 22 banning orders among students involved in last autumn’s revolts) another raid on June 13th concluded with another 7 arrests and 9 banning orders. The measures applied to the arrestees are if possible even stricter than for the previous arrests: 6 people are under “home arrest” and can’t communicate with anyone apart from people they live with. An activist from Milan was arrested simply for taking part in the big solidarity demo against the arrests of May 4th. In total, more than 90 people are now under arrest or investigation, and this includes people of all ages, from secondary school to university students. END_OF_DOCUMENT_TOKEN_TO_BE_REPLACED