Translation of a painfully beautiful article written by fellow blogger psikosomatica. The original in Italian can be found on her blog. Thanks psikosomatica for writing this. Memory must be saved…

11 years minus a month

When I came back from the G8 in Genoa 11 years ago, I immediately put my thoughts down on paper to send to an older, ill comrade who’d asked me to give an account. It was a cold, chronological, distant – nearly absent – reportage. I was trying to separate my emotional side from the analytical one. I kept doing this for a long time. Nowadays I still keep clear of analysis and pedantic tones. I realise, now that the 10×100 campaign has begun, that in those days I buried a part of myself; I realise that the detachment in those 10 pages I wrote then was a way to distance and protect myself, to be able to sleep at night without suddenly hearing the sound of helicopters, without dreaming of police raids in my room. In the event it was useless anyway, as I ended up touring Italy with my comrades who’d been arrested for talks about Bolzaneto, and I can’t forget any of the things that happened to them. They can’t either, obviously. Just as I can’t forget that it was only a matter of 15 minutes that morning that saved me from being arrested as well. All I have to thank is an instinctual, sudden decision, taken on the basis that if something was going to happen it’d been better to be among a crowd of 300,000 rather than one of few hundreds. What I wrote back then is now lost, not by my will, but I don’t think I’ll make any attempts at finding it again.

Memory must be saved, I know. Some details are beginning to fade, I’m starting to forget names, I mix up times and circumstances. Some things have stuck: words, contacts, handshakes, hugs, instinctual sharing gestures. The sea dotted with patrol boats. Snipers on the roofs. Genoans giving us water from their windows. That guy on the last floor, perched on top of his balcony rail, lifting up a portrait of Che Guevara. The woman in the grips of a panic attack before sleeping, the evening of the 20th. The guy wearing black, German or English I’m not sure anymore, striken by an epileptic attack on the seafront, right in the middle of police charges, and the panicky call to an ambulance that could have never got there. The legs of a comrade met on the journey there, burned by teargas explosion. The feeling of being in a trap. The death of Carlo Giuliani, a boy. Looks that last a fraction of a second, and convey fear. Thirst, lemons, sweat, bicarbonate of soda, tissues, dirty t-shirts, dusty shoes. The baton lifting above the head of the guy next to me. 3 days without any time to eat, and nevertheless full of adrenaline enough to run, jump, pull by the hand people paralysed by fear. The constant state of self-control and alertness, never allowing oneself to let go of the tension. The call I got from a friend in Germany asking me if I was OK – the only time tears ran freely off my face. The train they packed us on in Genoa Brignole station the evening of the 21st, surrounded by police so that nobody could get off, and that was ordered to go – what a coincidence – the same exact moment the butchery at the Diaz School started. The calls to the arrested comrades’ families, a torment never felt before. Meetings broken up, problems with translations, discouragement. My mother crying on the phone – she’d never cried for me before then – and asking me to leave, to not get myself killed. Even now she’s convinced I didn’t tell her everything and imagines who knows what about what happened, and will never change her mind. The nightmares and depression of the following days, the broken sleep, not wanting to talk and then suddenly bursting like a river when we realised we would be understood. The ignorant and patronising controversies about the organisation, the management, the fences’ trap, the press, the threats, the coffins, the innocent and the guilty, the violence and the white hands in the air. And the Whites, the Blacks, the Blues, “You caused a death”, “No, it was you”. 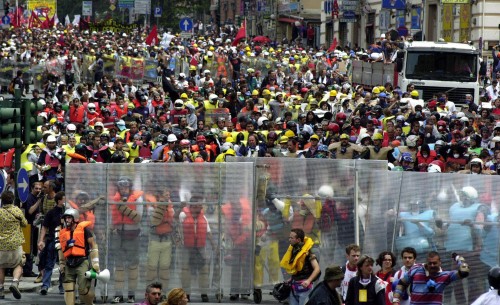 In those 3 days I left something behind I’ve never been able to find again. I can’t talk readily about it with people who weren’t there and were watching TV. I haven’t been able to write again the pages I lost. I feel ashamed. All that’s come out between yesterday and today, when I realised I’d lost those pages, is a chronology of events, stages, places. The journey there, the arrival, the camp in Redipuglia, the migrants’ march, the gig, Piazza Paolo Da Novi, the attack on the bank, the police charges at 10am, the clashes till the evening, Carlo’s murder, the sleepless night, the arrests and the butchery of the following day. Data. Facts. I was there. I’ll always take it with me, together with the nausea, the anger, the pain, the hate and disgust, the disorder in my memories that I try to control. I find it useful to keep talking about the batons, the gas; about what we felt under the water jets of the hydrants; about the provocation of the hugely disproportionate military presence even before the first window was broken; about the terroristic management of public order; about a death that had been planned for months; about the banality with which the whole matter was dealt with. About the fact that a whole movement – varied and heterogeneous in analysis and practice – was called “murderer”, and not the people who actually committed the murder, tortures and humiliations and were afterwards promoted. Nor was it ever considered the responsibility of the press, which for months before had been carrying on a massive propaganda campaign. Genoa has been a bomb that has left an open crater in the collective consciousness of at least a couple of activist generations, and it’s useless to invoke and misuse it every time a glass gets broken or a car gets burned. Genoa cannot be compared to any other thing ever happened before in this country. It gave way to a new management of protests by the thugs of state, it was a workshop on repression, a case study for the Secret Services and the psychologists of mass behaviour, an observatory on the strategies and rituals of movements, the excuse used to even criminalise the physical presence of people in the streets. 11 years have passed, and words still choke in my throat for what they’ve done to us, for how they’ve trapped us and broken our legs and have made us become protagonists of bar conversations about violence and broken cash points. After having been through the phases of repression, processing, critique, fury, of “It could have gone a different way”, I still find myself before the same walls, the same prepackaged objections, the same CCTV biased reconstructions. What remains is the evidence, the transcripts of trials, the testimonials, pictures, videos, films, books…but nothing, nobody has been able yet to give something real back to those who were there.

This entry was posted in Analysis and Editorials, Repression, Prison & Police Brutality and tagged G8 Genoa 2001, repression. Bookmark the permalink.