For background info and context on the Occupy Pisa past successes read this old article here.

February 15th: only two days after the launch of the new campaign to promote the occupations in Via la Pergola, local police forces responded with a sudden eviction of the building that started at 7am. Three students who were inside the building preparing to move into their new rooms (part of the building was destined to be a student residence), were given on-the-spot cautions.

A protest spontaneously arose in the area and soon became a demonstration through the city centre. Despite a series of police charges, the protesters managed to storm inside the Council building and hang a banner in support of the occupation: “Via la Pergola won’t pay no debt to the financial Mafia“. Later on, they went on to occupy the Unicredit bank (one of the banks involved in the speculations around Via la Pergola’s occupied building), and then kept marching through the city and flash mobbing several other banks.

In the meantime, a camp was being swiftly put up in the nearby Piazza Dante, while emergency meetings were being called. The camp is receiving an incredible amount of solidarity and interest by local residents, many of whom have attended the meetings and got involved in the project. Despite the eviction, it was decided to go ahead with all the initiatives and projects that had been planned for that day: the People’s University inauguration was moved to the Humanities Faculty of Pisa University, and saw the participation of university teachers, students, activists and local residents.

At a public assembly held straight afterwards, people discussed different options to continue the struggle from the new base in Piazza Dante; other scheduled activities, such as the self-managed canteen, were moved to different places. A few days later, the Debt Advice team, that had been previously been based in the evicted building, decided to become mobile and started a tour around Pisa, stopping at symbolic places such as the local Employment Centre and the University canteen, to protest against the new government’s austerity measures. 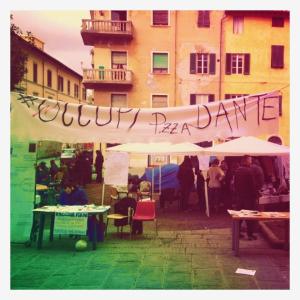 It would seem that the attempt to crush the Occupy Pisa experience has only made it stronger: phase 2 of the project is now on, in the streets!

Many thanks to Pisa and national InfoAut crew for info and materials, sources here.

This entry was posted in Social Mobilisations & Community Organising, Updates On Oppression & Resistance In The Motherland and tagged movements, occupations, Occupy Pisa. Bookmark the permalink.